EASELS – HOW TO PROP UP THAT CANVAS – PART 1 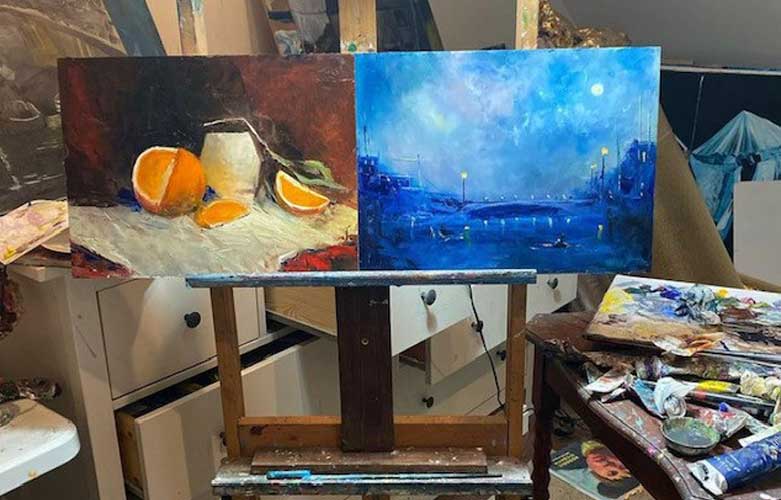 EASELS – HOW TO PROP UP THAT CANVAS – PART 1

Many moons ago, when I was still very innocent in the ways of the world and those around us, I was delighted when I became the proud owner of a Winsor and Newton sketching easel. This did me throughout the Junior Cert and served me for many years thereafter. It is still doing the rounds in the family some 30 years later. It was cheap, lightweight, and easy to pack away. Then, I moved on to an equally cheap and cheerful table-top easel which cost me all of €25. It was seriously handy for going to the local painting workshops as the inside box could hold little jars for the solvent and mediums, paints and paintbrushes. I could also secure the wet painting onto the front of the box. It was easy to carry and transport with minimal paint accidents in the car. I only moved to studio easels when I started working with larger sized canvases. However, that being said, for the very large canvases I actually just taped the canvas to the wall and then got the canvas stretched when the painting was dry and ready to be framed.

Now, I have several inexpensive H Frame easels which I have had to modify to suit the studio and working in front of them. I got them in from China and they weren’t designed for anyone over 5ft 2”. So, from this, you will see that you can get by without splashing out huge amounts of cash when you are starting off. Indeed, if you look at images of Jackson Pollock working, he just laid the canvas directly onto the floor and worked around it. So, you really don’t have any excuse and the main thing is to simply pick up that brush and just start…

In this week’s blog, we will only be looking at the timber Studio Easel.

As always, I am not affiliated with any brands, stores, suppliers or persons I may or may not mention within this Oil Painting Blog. Your use of any of these products, links and the like are your own risk and it’s up to you to do your research/homework before you use them. This is just my opinion and experience and prices as mentioned are approximate only and may be subject to change.

CONSIDERATIONS BEFORE SPLASHING THE CASH

Before you go out and buy that easel, do a little research. Have a look at supplier websites such as Kennedy Art Supplies, Cork Art Supplies, Jacksons, Artmaterials and/or Norwich Art Supplies as there are an endless variety of easels out there.

Then, ask yourself, if you need a portable easel, one that you can carry to and from painting workshops and fold away when you are finished painting. Or a free-standing easel, that can remain in-situ if you are lucky enough to have a dedicated studio space.

Other considerations are your: –

There are many different easels out there, but the main types are Table Easel and Studio Easel.

As shown below, you can purchase a box table easel which comes in a small and large size. Lidl do a very good large box easel for around €30 at different times of the year. They also include a paint set which you can pass off to your children or grandchildren. As a side note, some of the students in the Workshops have been using Lidl’s canvases and the ones I have seen so far are pretty good, they are inexpensive and for the most part well-stretched unlike some of late that I have seen from other manufacturers.

Top Tip: – if you get a dent in your canvas just boil up the kettle and put the canvas over the steam and it will remove the dent – but take care not to burn yourself with the steam or kettle – again – do so at your own risk.

You can also spend a bit more, €60 upwards for an H-Table Easel or a Wentworth box easel as shown below.

Other types of table easels include a Workstation Table Easel which you can get in an A2 or A3 size but unlike the easels shown below, they don’t have an adjustable top clamp. Finally, you can get a unit known as a Taboret, which comes with a table attached to the easel and you can also get it with or without a press/drawer unit. 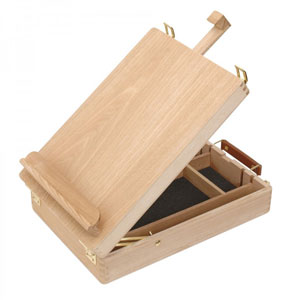 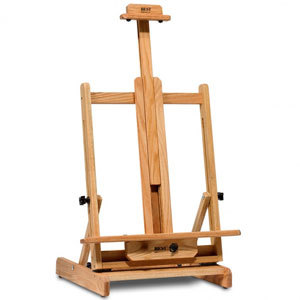 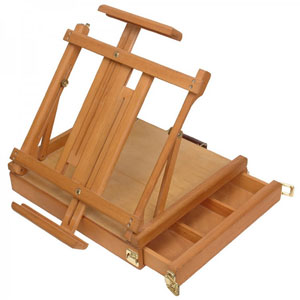 The most common studio easel is the A-Frame / Lyre Easel and the H-Frame Easel as shown below.

However, you can also get: – 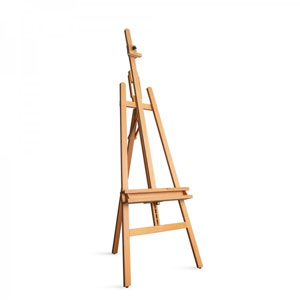 Easy to fold away / store 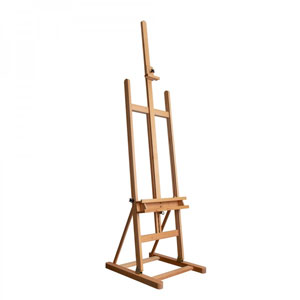 A bit more difficult to fold away

Sturdier than an A-Frame

Mabef, an Italian company produces probably the most known easel brand. I have worked on their easels many times and they have proven themselves to be robust, sturdy and reliable. Other brands include Daler & Rowney, Cappelletto, Richeson and Loxley.

IN THE STUDIO / WORKSHOPS

Here at the Painting Workshops, we generally stand as I find students are more alert and energetic and it also facilitates better overall movement and posture. However, that being said, I also have studio high chairs for those who want or need to sit. We use H-Frame easels, primarily, because of the easels square base which eliminates potential trip hazards and takes up little floor space. The only real downside, to these working easels, is that I have had to modify the base ledge on which the painting sits. This was in order to facilitate taller students, those over 5ft 2”. Initially, I used two clamps, one at the top of the painting and another at the base of the painting. However, when Covid19 hit, I had to come up with an alternative and a carpenter friend designed and installed the additional ledge as shown below: – 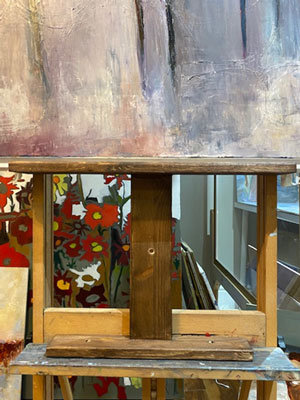 Next week, we will deal with the Plein Air Easel – (easels for painting outdoors) – such as the French, Donkey, Pochade and Tripod easels. Until then have a marvellous and productive week – happy painting you guys…