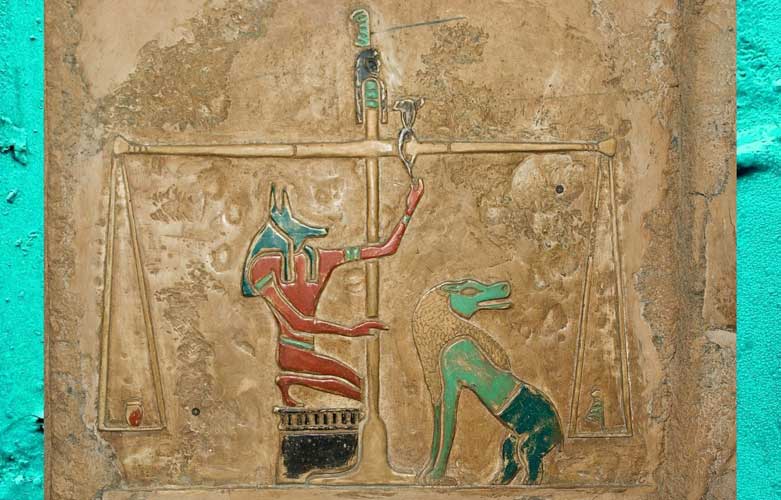 It must be more than 20 years now since I travelled to Egypt. At the time, I started in Luxor, visited the Valley of the Kings, travelled down the Nile to the Aswan Dam, there I took a plane to see the temples at Abu Simbel and then back up to Cairo to see the museum, and the pyramids at Giza. It is an incredible place and well worth visiting.

I was also lucky enough to see the bust of Nefertiti in the Neues Museum in Berlin – also another terrific place to visit. *

Ancient Egypt, lasted for over 3,000 years from c.3100BC with the reign of Egypt’s first king, Narmer to 30BC with the death of Cleopatra VII, thereafter, was absorbed by the Roman Empire. (Tyldesley, Historyextra, 2015) 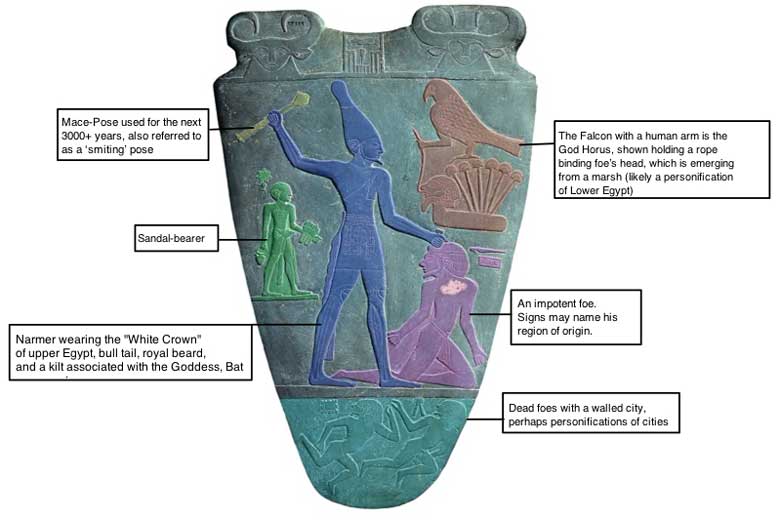 Egyptian art was first and foremost functional and based on the concept of “perfect balance”. (Mark, World History Encyclopaedia, 2017)

The artists drew from memory, according to strict rules which ensured that everything that had to go into the picture would stand out in perfect clarity. Everything had to be represented from its most characteristic angle. For example, the human body, the head was always shown in-side profile with one “full face” eye, the top half of the body is shown from the front and the legs to the side and feet with the same instep and just one big toe.  (Gombrich, 2017) 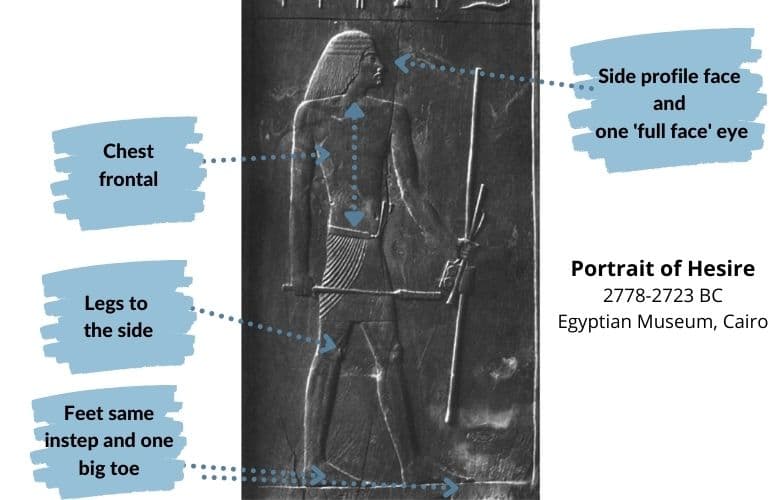 Prior to researching for this week’s blog, I honestly thought that akin to prehistoric art that there would be a bounty of artists who incorporated or were inspired by the artwork of ancient Egypt.

However, I was surprised to see that I was wrong, as really the only major artist to implement the style of the ancient Egyptians was Gustav Klimt. The other artists included below only incorporated the lasting works such as the Sphinx, the Great Pyramids or temple ruins within a landscape or to tell a story such as the death of Cleopatra by Hans Makart (1840 – 84) as shown below: – 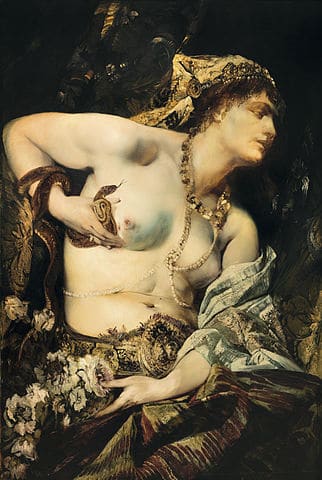 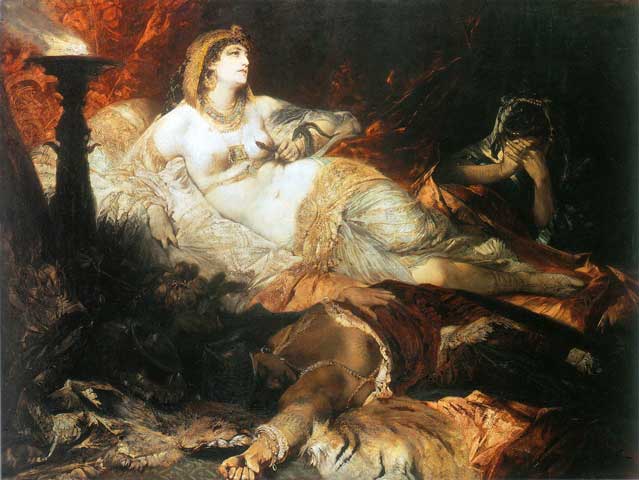 In 1890, Klimt, his younger brother Ernst and Franz von Matsch were commissioned to provide 40 paintings for the Kunsthistorishe Museum in Vienna of which two were dedicated to ancient Egypt. 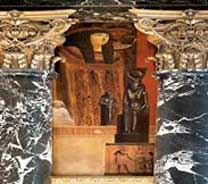 The first shows a naked woman with an ankh in her right hand (the Egyptian cross, a symbol of life, a cult object and amulet. She is life giving and then between the columns lurks death depicted as a wooden sarcophagus. To provide inspiration for these works of art, Gustav used images of archaeological finds and an 1877 catalogue of the Egyptian museum in Cairo. (Kats, Arthive publications – Up the Stairs leading to Klimt) 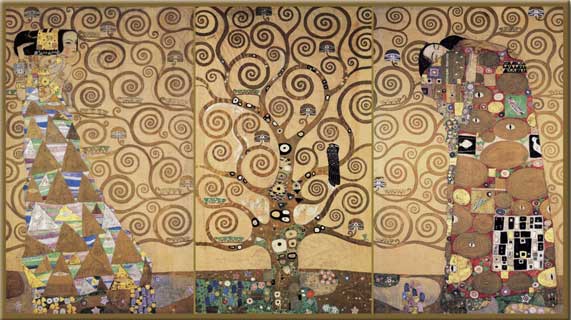 The tree was a mythical symbol suggesting the perpetuity of life and the blackbird reminds us that everything has a beginning and an end. (www.gustav-klimt.com, 2011)

Hone was the great-grandnephew of the artist Nathaniel Hone the Elder (1718-1784).

He studied in Paris where Courbet and Corot were major influences and returned home to Ireland in 1872, settling in North Dublin. (Whyte’s – also see their link for other works by him)

Hone painted this watercolour when he visited Egypt in 1982 (Dunne, Irish Times, 2019). 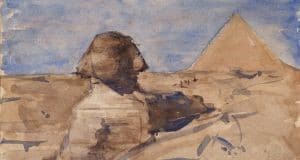 The Sphinx Half in Shadow and Chephren Pyramid, Giza, Egypt 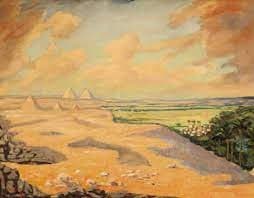 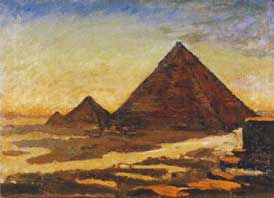 Churchill was often described as an amateur artist. However, he learned from some of the best in the field including Lavery, Sickert and Nicolson. (Coombs, Telegraph 2014 / Machemer, Smithsonianmag.com, 2020)

‘Egypt is one of the most thrilling countries I’ve ever been to in the sense that these monuments are the oldest known buildings anywhere. After all, when Cleopatra showed Julius Caesar the pyramids, they were already two thousand years old and more. It is quite awe-inspiring; not even in China are there things older, and I think you feel connected with them, whoever you are’

He first travelled to Egypt, at 26 after graduating from the Royal College of Art and thereafter, completed 40 works of art with the Egyptian theme. The painting, the Great Pyramid at Giza with Broken Head from Thebe is the only surviving canvas from his first trip. For more information on Hockney and his painting click on the link to a Christie’s article written by Cristiano De Lorenzo, 2013. 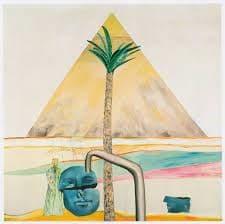 In our next blog we will be looking at colour, the primary colour – red.